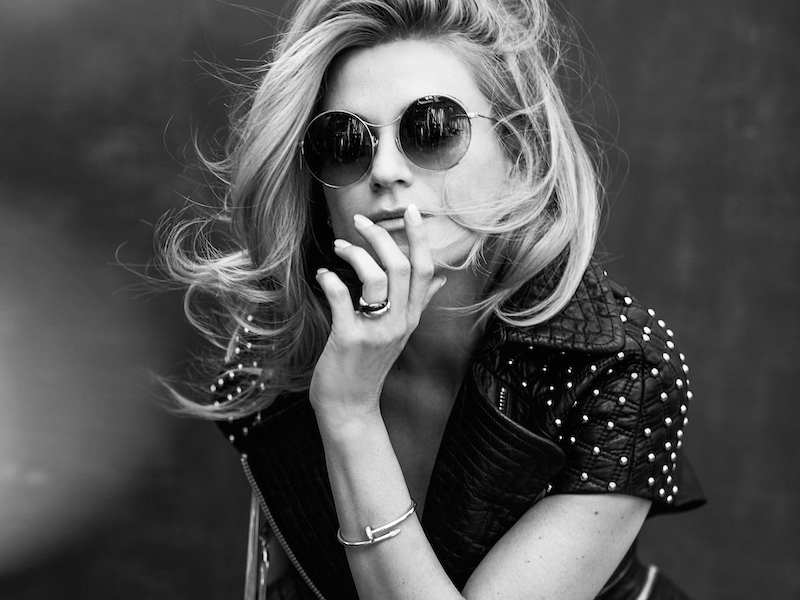 The story of vocalist, guitarist, and pianist Melody Gardot is remarkable; she's persevered against abject adversity throughout her life. Blessed with a beautiful alto voice and grand insight as a songwriter, Gardot overcame a life-threatening bicycle accident early in her career. As amazing as her story is, what is more evident is that she possesses a blue, jazz-oriented style and dusky persona that reflect not only her afflictions, but conversely the hope and joy of making personalized music that marks her as an original.

Born in New Jersey in 1985, she took up piano and played as a youngster on the nightclub scene of Philadelphia, influenced by jazz, folk, rock, and pop music. At age 19 she was a fashion student at the Community College of Philadelphia. But, on a fateful day, while riding her bicycle, the driver of a Jeep made an illegal turn, hurtling into Gardot and leaving her in the street for dead. As she lay hospitalized for months with multiple head injuries and pelvic fractures, her love for music was the best therapy she could receive. While in her hospital bed, she wrote and recorded songs that would become the EP Some Lessons.

Upon her eventual release from intensive care, Gardot found the strength and determination to further her career. Hypersensitive to light and noise, she wore dark glasses. On-stage she also required a special seating unit, and often wore a Transcutaneous Electro-Nerve Stimulator, a TENS device, to assist in alleviating her neuralgic muscle pain. Despite these hurdles, she recorded her debut full-length, Worrisome Heart, which was reissued in 2007 by the Verve label. Well-received, the album drew comparisons to Laura Nyro, Joni Mitchell, and Eva Cassidy.

In 2009, working with producer Larry Klein and arranger Vince Mendoza -- both known for their work with Joni Mitchell -- Gardot followed up her Verve debut with My One and Only Thrill. The album peaked at number two on the Billboard U.S. Jazz Albums chart. She returned in 2012 with her third studio album, The Absence, featuring production from guitarist/composer Heitor Pereira. The effort continued her upward trajectory, landing in the Top 30 on the Billboard 200 and reaching the top of the U.S. Jazz Albums chart.

Gardot altered her musical direction when she returned to the recording studio. She reteamed with Klein and focused on music strongly influenced by R&B, blues, and jazz in a set of original, socially conscious songs. Her first single/video, "Preacherman", was inspired by the death of Emmett Till. The second, "It Gonna Come", was released as a docu-video a week prior to the album. The full-length Currency of Man was released by Decca in June of 2015. In 2018, she delivered her first full- length concert album, Live in Europe. Recorded at a series of shows between 2012 and 2016, the album showcased Gardot backed by her adept touring ensemble.

In 2020, she again paired with Klein for ‘Sunset in the Blue’, which featured an all-star cast of studio contributors including Till Bronner, Antonio Zambujo, arranger Vince Mendoza and engineer Al Schmitt. The first single from the album titled “From Paris With Love” featured a ‘Global Orchestra’ of musicians. Hand assembled by Gardot from over 30 different countries and recorded in isolation during the first COVID-19 pandemic lockdown, the track was released with an accompanying video piece in order to raise charity money in support of health-care workers and public awareness for those struggling in the arts. ‘Sunset in the Blue’ was released on October 23rd to critical acclaim as yet another benchmark record in the tradition of Jazz music.

On August 22 2021, Philippe Powell, composer pianist and son of Baden Powell, came to Melody's studio in Paris to stay for two weeks. Their mission: write a record. Now she had heard Philippe before, and since that first crossing, many years ago, she was blown away by his talent. Hearing his compositions and observing the way he played she knew he had something. He’s like “The Bill Evans of Brazil”, Melody would screech to her colleagues, “... he’s just got that thing that goes so deep...”. This led to the May 20, 2022 release of Entre eux deux.

Melody Gardot and Philippe Powell breathe a new life into the classic piano and voice format with their fresh perspectives. Recorded in Paris, the album features 'This Foolish Heart Could Love You' and 'A La Tour Eiffel', and so much more. Sensual, romantic and intimate, 'This Foolish Heart Could Love You' is a love song reminiscent of a great jazz standard. Written by Gardot and Powell, the song arrives alongside an iconic video, produced by 247 Productions and directed by Beki Mari, who has previously worked with the likes of Rita Ora, Glass Animals, Sigrid, Paloma Faith and Sting. The video showcases the dancer étoile, Marie Agnes Gillot and her partner dancer étoile, Germain Louvet, interpreting this feeling of a feeling moment that just may escape one's grasp, while paying hommage to Auguste Rodin's love of dancers at the iconic Musée Rodin in Paris.