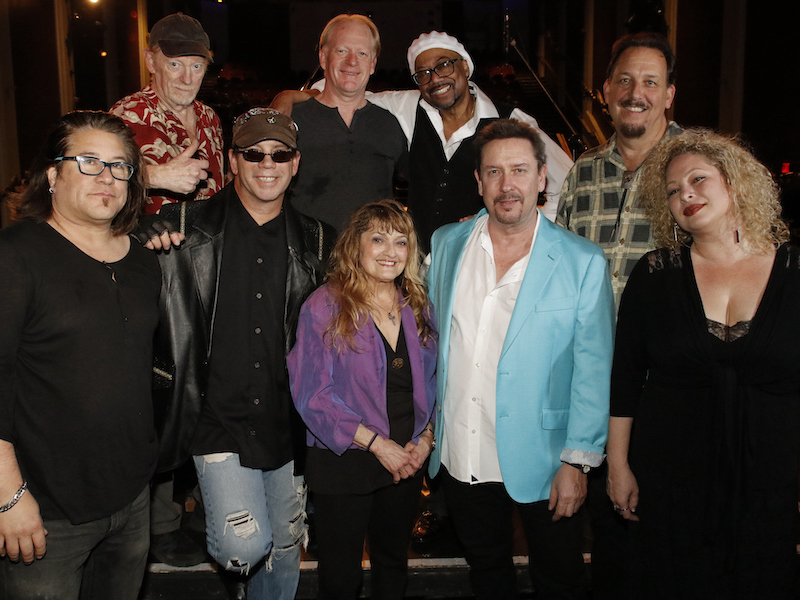 Lydia Pense and Cold Blood are Bay Area music pioneers with an amazing history and an exciting future.

Lydia and the band debuted when the Fillmore was at its peak as one of the nation’s musical Mecca’s. Owner Bill Graham was so impressed with Lydia’s voice and the sound of the band that he immediately signed Cold Blood to his new record label. During the span of six original late-60’s, early-70’s albums, Lydia Pense and Cold Blood helped, along with Tower Of Power, forge their own specific brand of funk/soul and R&B which came to be know as East Bay Grease. That music still holds up today, proving that great music is timeless and will continue to inspire generations to come. Lydia Pense and Cold Blood packed the San Francisco Ballrooms in their heyday, but that was then and this is now. In the now, Lydia Pense and Cold Blood still fill halls with cheering, dancing, foot-stomping fans. Far from fading over the years, Cold Blood has flourished.

Along with Tower of Power, Cold Blood pioneered the Bay Area's brass heavy funk-rock sound, which came to be known as "East Bay Grease." After debuting at the Fillmore in 1969 and initially signing to Bill Graham's San Francisco Records label, they developed into one of the most popular high-energy bands in the Bay Area. Fronted by the proverbial little girl with a huge voice, Lydia Pense's powerful vocal chops were impossible to ignore, and despite frequent personnel changes within the band, Cold Blood always attracted inspired and creative musicians and remained a crack unit.

Cold Blood seemed to be overshadowed by Chicago Blood Sweat And Tears, Tower Of Power, and other more commercially successful horn-fueled bands of the era, but their biggest curse was the critics and reviewers who were relentlessly comparing Lydia to Janis Joplin (who, in reality praised Lydia and the band, including their blistering cover of "Piece Of My Heart"). This, combined with questionable management, frequent personnel changes, and weak album distribution relegated the group to limited success. Cold Blood appeared at the Fillmores often and at many major concerts and festivals but remained most popular in the Bay Area.

Cold Blood's sixth album, Lydia Pense and Cold Blood, released during the bicentennial year of 1976, would be the group's last studio effort of the 1970s. Lydia settled into seclusion on the outskirts of Sonora for most of the 1980s, raising her daughter Danielle. As her daughter approached adulthood, Lydia again began pursuing music and by 1988 had recruited the musicians who would begin a new phase of Cold Blood's horn-driven rock and soul-drenched sound.

A live album titled Live Blood was issued in 2008, proving Cold Blood's appeal had not diminished. Featuring classic older songs as well as new material, this album proved to be what Cold Blood fans had long been waiting for: a sizzling live set that remained true to the pulsating horn-laced sound that defined the band, fronted by an incomparable singer with an astonishingly powerful voice.

The word legend certainly applies to Lydia Pense and Cold Blood…and not in some past tense-make-a-living-as-an-oldies-act sort of way either. Pense can still shout like a 60’s soul diva and purr a slow blues tune with spine-tingling subtlety. Cold Blood, as a whole, features a stellar group of musicians who have been playing together for nearly 20 years including Steve Dunne on guitar, Steve Salinas on keyboards, a gritty-growling horn section comprised of Rich Armstrong and Rob Zuckerman along with a stellar rhythm section featuring Evan Palmerston on bass and T Moran on drums plus singers Fred Ross and Dana Moret. The band members are all veteran Bay Area musicians who have played with many great artists including Elvin Bishop, The Starship, Boz Scaggs, Albert Collins and more. Of course there is Lydia who still has the chops with the patina of a seasoned veteran who’s done and seen it all. Together she and the band continue to twist together R&B, (both Old School and New School); into something that doesn’t have a label... On any given night, Lydia Pense and Cold Blood power through their historic essentials, like “You Got Me Hummin’,” “I Just Want To Make Love To You,” “I’m A Good Woman,” and “Down to the Bone.” But now, there’s a whole new CD of future classics that draws on their heritage but is not stifled by the past. Now able to draw from the first new Cold Blood album in three decades, Lydia and the band blast out a set that covers 40 years of thumping, throbbing, East Bay funk.

It’s been a long road, over 40 years to be exact with a break somewhere in the middle. But, Lydia and the band are living proof that a little time off can be a really good thing. With their new CD, “Soul Of The Gypsy” turning heads across the country, fans are remembering just what has been missing from music in the last few decades. The 12 songs exemplify how a performer can take great strides forward, without forgetting her roots. Using “Soul Of The Gypsy” as their muse there is a renewed interest in live performances, from both the band, and venue owners. Cold Blood is booking dozens of shows across the country, entertaining generations of club, theatre and festival goers.

Cold Blood has been blessed with the ability to reach backwards for original influences and the creativity to reach forward, working with new approaches. The music they play is ageless, and can still fill any room to the rafters.