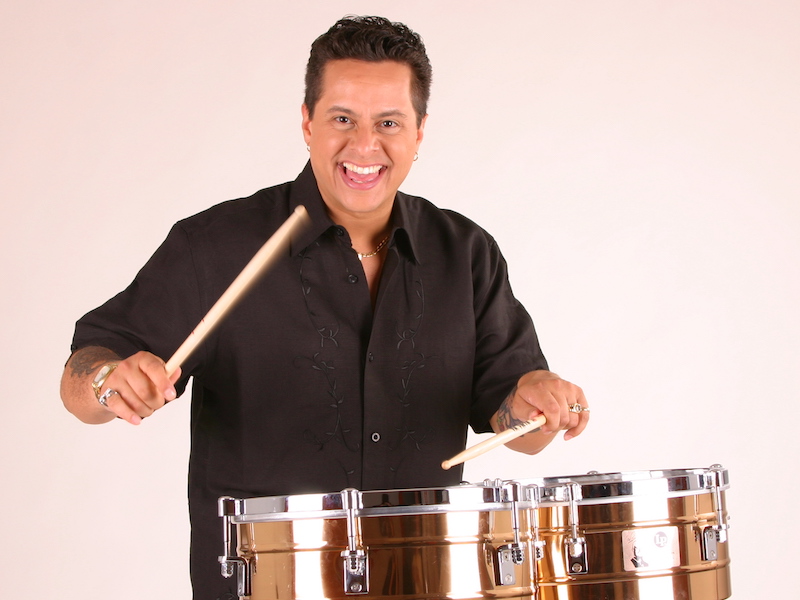 Sensuous music with a modern edge

Sparks fly, rhythms ignite and hail to the king is played in afro-Cuban rhythms. Into this world of fiery music crossing both cultures and generations dances the young prince--Tito Puente, Jr. Natural heir to the throne of El Rey, he is unmistakably the son, physically, spiritually and musically of Tito Puente, seminal bandleader, percussionist and legendary good will ambassador of Latin music.

Young Tito's heart is rooted deep in the musical soul of his father. But he is staking out a future in the affectionate response of those who want a modern edge added to the sensuous music that runs through all Latin lives. Puente, Jr. is taking his own eclectic sound and like his father before him --is making history and moving generations.

Certainly his father is there in the wide grin, the wild timbales and the charisma that rushes past the footlights and tells the world that this is the music that moves your feet, your soul and your spirit.

Puente, Jr. has had two Spanish-language albums, several Billboard dance hits and a Latin Music Award for Best Salsa Video of the Year for his cover of his father's signature, "Oye Como Va." His second album contained the single "Caliente" with the arrangement by El Rey himself.

Puente, Jr. was born June 2, 1971 and raised in New York City, feeling the rhythms of the music before he could walk or talk. Naturally, his first instrument was percussion; "I had no choice; there were 50 sets of timbales in the garage." Later he added piano, songwriting and producing.

He learned his craft and honed his talents playing the New York City club scene with other well-known Latin artists including the "Queen of Salsa," Celia Cruz.

Recently, he joined forces with two other sons of legends in the Latin jazz world, Mario Grillo ("Machito") and Tito Rodriguez. These three men are co-leaders of "The Big 3 Palladium Orchestra," a lush and fiery rebirth of the music made famous by their fathers.

The global importance of Latin music adds other dimensions in the life of Puente, Jr. He continues his role as the Havanera Co. (TM) brand spokesperson for Perry Ellis through December 2004. "I enjoy the Havanera style," Puente, Jr. said. "It defines one of the two worlds I live in, the casual style of Latinos all over the world."

The other world is lived out on stage, where dressed in elegance, the soft-spoken Puente, Jr. turns on the supersonic smile and explodes with all the passion that is rightfully his, by birthright and by virtue of his own talent.

He remembers a special performance night - at the Skydome in Toronto, Canada, in front of 80,000 people with his father, Celia Cruz, and others. "So they announce me as the Prince and my father as the King! They called it 'Latin Royalty Night' - I'll never forget it!"

Back in the '50s, the geographical seat of power, the mecca for Latin music, was New York. It was there that a handful of incendiary talents reigned as royalty, Puente, Jr's. father among them. But this is a larger world, and the epicenter of power in Latin music now is the beat, and the heat is global.