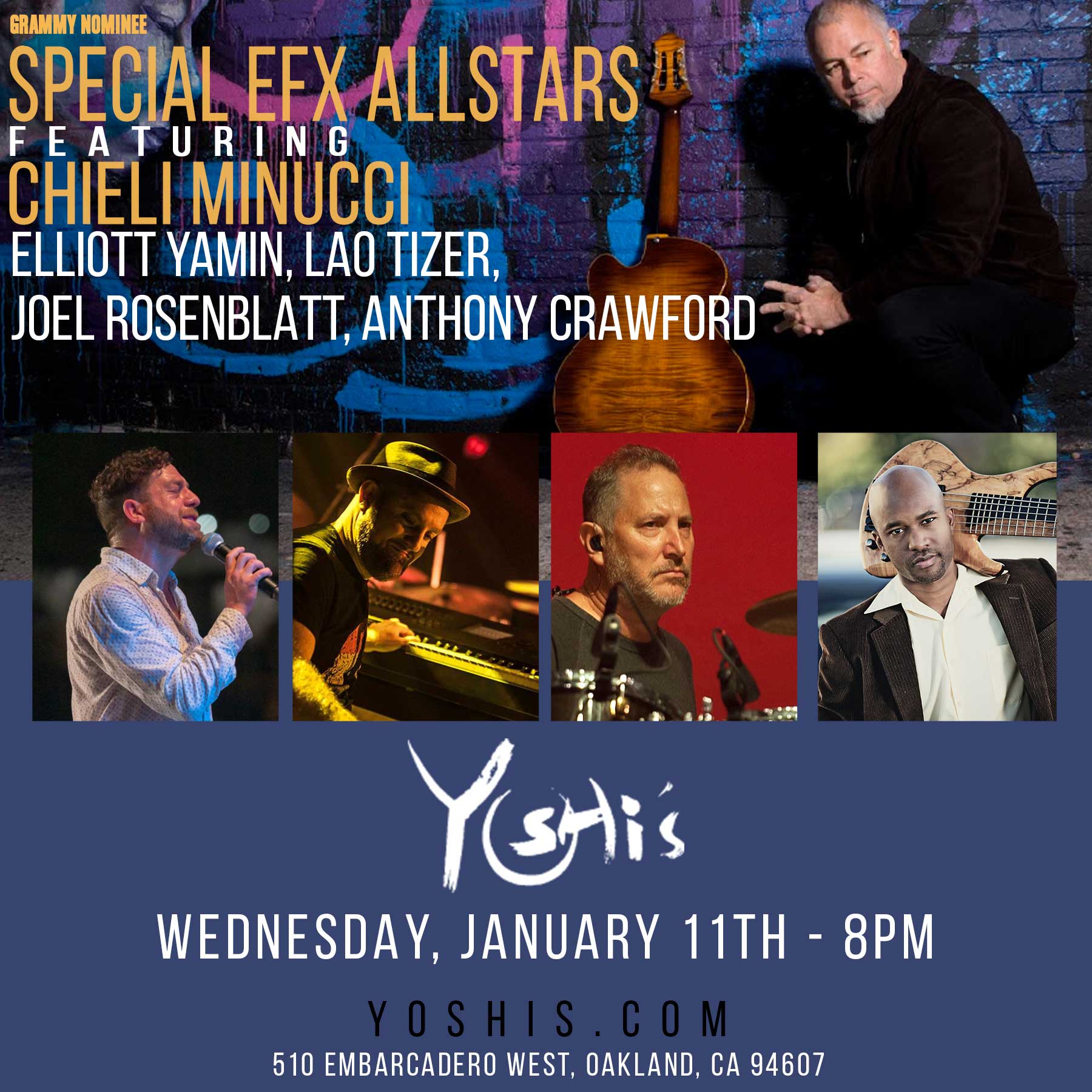 Besides writing and performing his own music, Chieli shares his guitar brilliance throughout the entertainment world. He has recorded and performed with many top artists, such as Celine Dion, Lou Reed, Lionel Richie, Jennifer Lopez, Jewel, Mark Anthony, Michael Bolton, Rupert Holmes, Eartha Kitt, Eddie Fisher, Anastasia, as well as jazz artists Kirk Whalum, Jeff Lorber, Norman Brown, Bernie Williams, Marion Meadows, Lao Tizer, Mindi Abair, Rick Braun, Gerald Veasley, Omar Hakim, and many others.  Although renowned in the jazz and pop world, Chieli is also a gifted television and film composer. He has won 3 Emmy Awards and been nominated 10 times for his eclectic compositional work. His music can also be heard on the soundtracks of the films Bowfinger, Legally Blonde, Panic, and others. Chieli's original scoring work can be heard in live stage productions of Peter Pan, Dora the Explorer, Thomas the Tank Engine, and others.

American Idol star, vocalist Elliott Yamin had no vocal training and was 90 percent deaf in his right ear, yet he vaulted to stardom after becoming a third-place finalist on American Idol. ELLIOT YAMIN's style is perfect for a smooth jazz festival - soulful with a jazz/R & B style. His debut album made it to #1 on the Billboard Charts. Yamin was featured in a nationwide American Idol tour performing live in front of half a million fans. Elliott launched his recording career following his appearance on American Idol as one of the top three finalists. His highly anticipated album, Elliott Yamin, debuted at Number 3 on the Billboard album chart and was the highest debuting album by an independent artist in Soundscan history. The self-titled disc achieved gold status in the U.S. and Japan, yielding the platinum hit, “Wait for You”. Hailed as one of the best male vocalists, Elliott would go on to release three more albums.

Keyboardist Lao Tizer is one of today’s rising stars of the world-fusion genre. Tizer’s original music has spurred comparisons of a modern twist to the 1970s and early 1980s heyday of jazz fusion, when trailblazing ensembles like Return To Forever, Mahavishnu Orchestra and Weather Report set the aesthetic standard. Lao’s music has a multi-genre, multi-national appeal and his group, The Lao Tizer Band, has toured the USA and the world while being nominated “Jazz Group of the Year”!  Their new 2018 CD/DVD combo release, Songs From The Swinghouse has received acclaim across the industry while debuting near the top of the Billboard Jazz Album Chart!