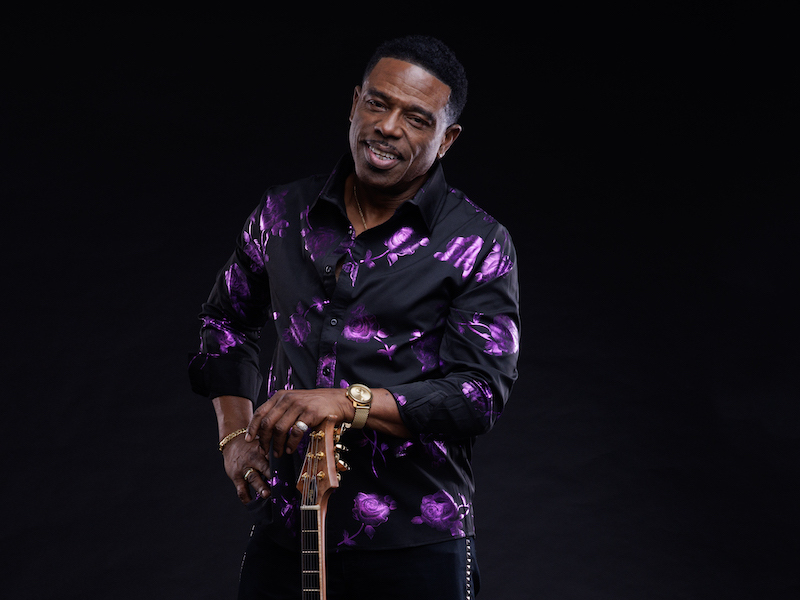 The joy that emanates from guitarist Norman Brown while he is playing is palpable. The guitar is simply an extension of him. The multi-platinum selling and chart-topping musician is an artist who is truly in service of the music with the goal to be a force for positivity. “I wish to be of service to my fellowmen as I journey through life,” he explains. “I look upon my work as an opportunity to be overcome with joy and to make the most of it. I want to inspire others to search inside themselves for the silver lining. We all have an opportunity to grow in gratitude for our lives and the blessings we have.” A dedicated meditation and Tai Chi practitioner, Brown confides that there are definite parallels between his practice of the aforementioned Ancient Art and his music. Brown reveals that it comes down to one thing - “balance.” With all of the accolades that Norman Brown has amassed the past three decades, including Grammy and Soul Train Music Awards, he has stayed the course for one reason. “Knowing that I’ve been commissioned by the Most High to channel a message of inspiration and motivation, brings me happiness,” he states. The Atlanta-based musician’s love affair with the guitar began at age eight. Watching his older brother play, Norman was drawn to the energy radiating from what he now calls his “Spirit Catcher,” the strings on the guitar. Waiting for his brother Roy Brown Jr., “Popsicle” to leave, Norman couldn’t wait to get his hands on his six string carefully stored in the closet. Luckily for us, Brown’s love affair with the guitar is still going strong. His technical wizardry, genre-bending facility, soulful finesse, and charisma, have made him one of the most sought-after internationally renowned musicians in Contemporary Jazz. Just ask his devoted and loyal fan base affectionately dubbed ‘Normantics.’ A musician’s musician, Brown has collaborated with everyone from George Benson, Brian McKnight, Kirk Whalum, and Miki Howard, to Jeff Lorber, Gerald Albright, Rick Braun, Peabo Bryson, and Chanté Moore, to name a few. Shanachie Entertainment VP of Jazz A&R, Danny Weiss, states, “At the risk of being blasphemous, Norman is the true successor to Wes Montgomery and George Benson. Like them, he's a jazz musician of the highest order, but you hardly notice because you're having so much fun listening to him.” At the core of Brown’s life and work are the 11 laws of God, the principles of universal law and wisdom from the Ancient Egyptian Spiritual Studies, The Ausar Auset Initiation System, "The Paut Neteru Of Anu," The Tree of Life, which focuses on peace, harmonious unification, wisdom, spirit power, order and truth, balance, justice, free will, creativity, thoughts and morality, manifestation and devotion for divine earthly living.

On March 25, 2022, Shanachie Entertainment will release Norman Brown’s 13th recording as a leader and fourth for the label, Let’s Get Away. Brown’s own take on the perfect getaway involves, “ A joyful and peaceful mental state, surrounded by companionship in an atmosphere of inspiration and beauty that is illustrated by the colors of nature.” Let’s Get Away conjures the serenity, joy, and beauty that Brown wishes for us all.

The riveting ten-track set showcases the genius and flair that has landed Norman Brown at the top of the charts time and time again. Featuring originals composed by Norman Brown and various album personnel, Brown’s highly anticipated new recording fuses the best elements of Jazz, R&B, Pop, Blues, and beyond. The lone cover is a well-known Lalo Schifrin composition that Brown puts his Midas touch on. Joining Brown on the all-star outing is fellow guitarist and label-mate Paul Brown, multi-instrumentalists Wirlie Morris, Shane Theriot, and Jeff Carruthers, keyboardists Lew Laing and David Torkanowsky, saxophonist Greg Vail, trumpeter Ron King, drummer Gorden Campbell, bassist Jeff Wolfe, and percussionist Lenny Castro. “It was an honor and pleasure to be joined by all of these divine beings who nourished the music and brought the perfect seasoning to this experience,” shares Norman. Let’s Get Away opens with the exquisite “Back At Ya,” the album’s first single, co-written with Laing, Torkanowsky, and Paul Brown, who plays percussion on the track. Norman’s crisp and buttery smooth riffs delight with every note as he trades choruses with saxophonist Greg Vail. The alluring title track, “Let’s Get Away,” is a collaboration with Wirlie Morris (Charlie Wilson, Confunkshun, Keith Sweat). The duo creates an emotive, funky R&B swinger that transports us to another dimension. The euphoric “Easy Livin,’” is the perfect mood-enhancing anthem, bound to put a smile on your face. Brown confides that the secret to easy livin’ is “being able to access your ability to access and remain in a living state of a Peaceful Joy in the face of all obstacles, setbacks, problems, and challenges” The percussive uptempo ditty calls to mind the timeless Hugh Masekela song “Grazin’ in the Grass.” Norman kicks it up a notch with the surprising key change and tasty blues-drenched solo halfway through.

Norman Brown also takes the opportunity on Let’s Get Away to pay homage to two significant men who have shaped him personally and the other musically; his Father, Roy Brown Sr., and Wes Montgomery, who transformed the guitar harmonically, melodically, and technically.

Brown puts his Midas touch on Lalo Schifrin’s “Down Here On The Ground,” which was the title track of Montgomery’s 1968 Creed Taylor produced the session. The album hit #1 on the Billboard Jazz chart and #4 on the R&B chart. The original version was part of Schifrin’s Academy nominated score to the film Cool Hand starring Paul Newman and George Kennedy, who won an Oscar. “My inspiration for recording this song was to bring joy to my Father, fulfilling his request to learn Wes Montgomery’s version note for note, phrase for phrase, and with the feeling of his rhythmic touch. This was a great moment to play tribute to both my Father and Wes Montgomery,” shares Norman. “Wes Side Story,” co-written with fellow guitarists Shane Theriot (who collaborates with Norman for the first time on the recording) and Paul Brown, is another shining tribute to “The Golden Thumb as Wes was affectionately crowned. Norman adds, “Wes exposed me to guitar playing so creative, that it showed me a total range of musical expression that touches every emotion from warmth, to edgy, to excitement, all the way to blazing.” “L.A. Chill” is the coalescence of laid-back groove, deep soul, and mean guitar licks. The killer arrangement of Norman and Shane Theriot’s “Talk It Out,” is as catchy as it gets as Norman raises the roof and horn section of Ron King and Greg Vail to elevate the vibe. The percolating and effervescent “Late Night Drive,” conjures warm moonlight summer nights with the top down and your favorite soundtrack pumping through the speakers. Norman’s trademark assured touch, sublime, and agile soloing make it hard to sit still as he blesses this undeniable groove. He explains, “I don’t think many people understand that the gear one uses including his instrument is only a partial makeup of the tone or overall sound. The voice and tone of an artist is generated through one's fingers, phrasing, rhythm and overall conceptual approach in playing his instrument.” The R&B gem “I Won’t Hurt You” is a collaboration between Brown, Wirlie Morris and vocalist James Champion while “Sunset On Chandler,” transports us to our final destination where Brown pulls out all the stops managing to balance grace, braun, grit, and sophistication. The latter, another collaboration with Shane Theriot and Paul Brown, also features trumpeter Ron King.

Born in Shreveport, LA, and raised in Kansas City, KS Norman Brown has enjoyed a career longevity that is rare in this business. Never one to rest on his laurels, he states, “I always remind myself that success lies within my own brain. To expect difficulties and to force my way through them. To avoid procrastination in all its forms and to never, under any circumstances put off until tomorrow any duties that should be performed today.” It is these virtues that keep Brown on his astonishing evolution. A graduate of the Musician’s Institute in North Hollywood, Norman Brown would go on to teach at the school until he landed his first deal, as the flagship artist on Motown’s Mojazz label.

In 1992, Brown recorded the albums Just Between Us, the Gold selling and Soul Train award- winning After The Storm and Better Days Ahead. Having recorded a string of successful albums including 1999’s Celebration (in which he teamed up with Paul Brown), 2002’s Just Chillin’ (featuring vocalists Michael McDonald, Miki Howard, and Chanté Moore) scored a

Grammy. The same year, Brown joined forces with saxophonist Kirk Whalum and trumpeter Rick Braun forming the group BWB, recording their debut album Groovin’. In 2013 they released Human Nature, a tribute album to Michael Jackson, which was followed by their third collaboration BWB in 2016. Brown continued a trail of critically heralded albums including West Coast Coolin’ (2004), Stay With Me (2007), Sending My Love (2010), and Grammy- nominated 24/7 with saxophonist Gerald Albright. 2017 saw the release of Norman Brown’s anticipated and well-received Shanachie debut, Let It Go. Brown’s recording The Highest Act Of Love followed in 2019 and Heart To Heart in 2020 (both on Shanachie).

With the release of Let’s Get Away and in the wake of so much divisiveness, Norman Brown hopes that his music can be a reminder that, “We are one race of beings interconnected and interrelated, therefore, we are interdependent on one another to achieve Optimality! A life united in harmony in the state of a joyful peace. As the gears in a fine Swiss watch operates achieving the state of keeping perfect time.”