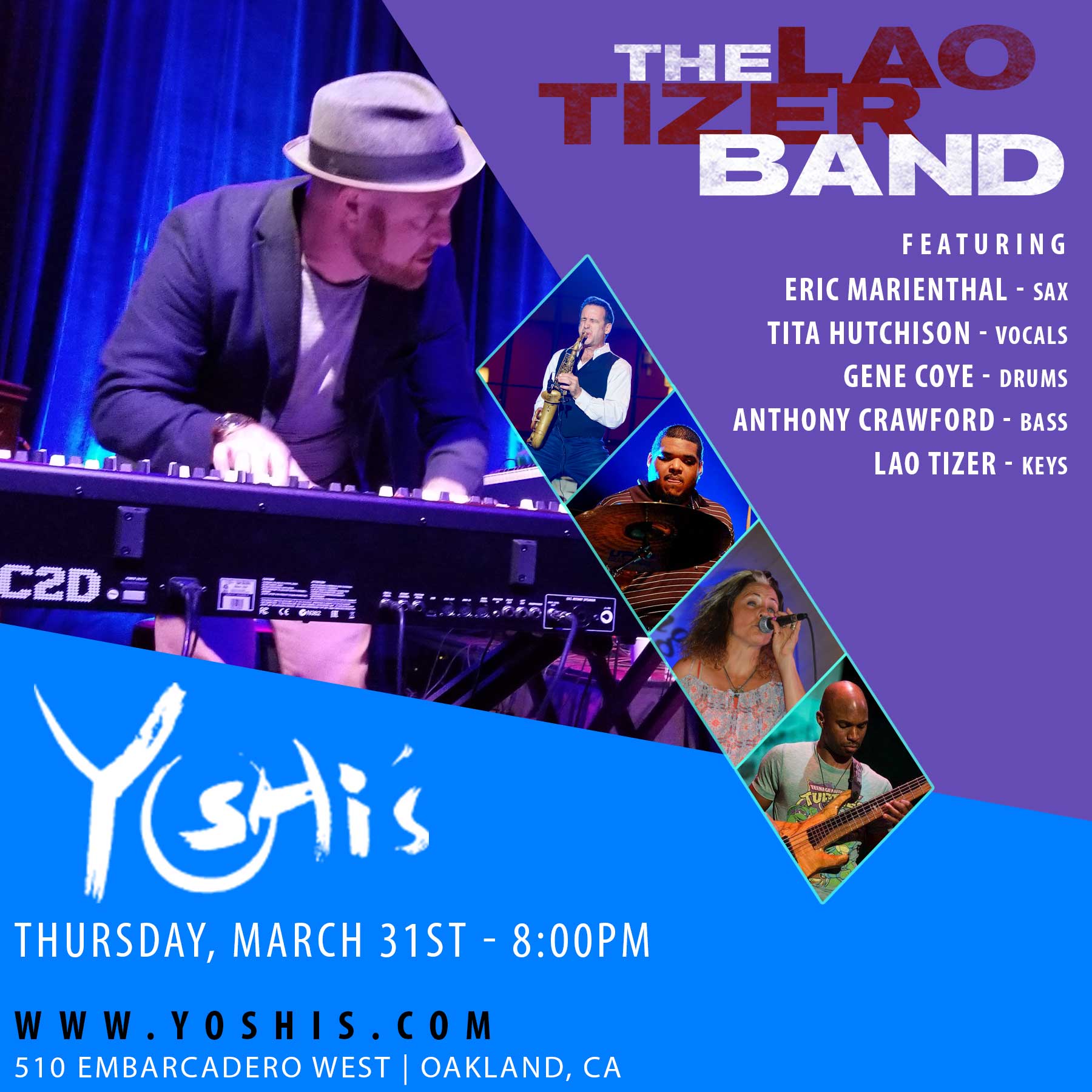 With more than five years since their last release, The Lao Tizer Band has taken the time to grow in every aspect. An updated larger band is exploring some new methods on their upcoming CD/DVD combo, Songs From The Swinghouse: recorded live in just three days at Conway Studios in Hollywood, the band explores three cover tunes with vocalist, a first for the group, alongside original instrumental tracks, bringing them to new heights of excellence and exuberance.

Featuring a thoughtful and at times surprising choice of tracks, while adding to an already stellar lineup of players with the addition of a seasoned vocalist, this is an album that has set a new path for the band and its dedicated fans. Songs From The Swinghouse features eight blistering original instrumentals and three iconic classic rock songs with reimagined arrangements. "We've never done anything with a vocalist and we've never done any cover songs, so this is the first time that I decided to delve into that realm, to basically expand the scope of our music," says Tizer. Critically acclaimed music-film director, Andy LaViolette (Snarky Puppy, Bokante, David Crosby, etc), documented the entire session in a simultaneous, 8-camera HD video shoot for the included DVD.

From the 2007 album Diversify, which showcased the multi-faceted richly textured musicality of an already celebrated career, to 2009's Passages in which the keyboardist and composer focused on a minimalist expression of his musical journey in a virtually solo piano recording with the barest of accompaniment, and then back to a pulsating full band on the 2012 release Downbeat, this ensemble of world-renowned musicians has taken Tizer's vision to a new level on the latest album. The jazz and world-fusion group now adds rock to its repertoire with a sizzling new collection of eleven songs.

Hailing from Boulder, CO, with a career that now spans nine albums over nearly a quarter of a century -- he was a teenage prodigy -- Tizer is the son of hippies with a Russian-Jewish background, and the mix of that ethnic family heritage, parental new age influence and growing up with the sights and sounds of '80s and '90s pop culture (alongside the music of the '60s and '70s he heard from his parents) have brought him to a place in his artistic life where he was ready to embrace a wider range of influences and stretch himself and his players to pull off such an ambitious project. one all my life.”

If the choice of Led Zeppelin's "Ramble On," U2's "Pride (In The Name Of Love)," and Cat Stevens' "Sad Lisa" seem astonishing, Tizer's arrangements render them almost entirely original. They are taken to the transcendent through the warm and soulful vocals of Tita Hutchison, who sang with the likes of Michael McDonald, Rick Rubin, Michael Jackson, and Foreigner, among others.

The group in fact stretches to 15 members at times with the addition of a string quartet, horn section and a marimba player. Just watching the video of "Metropolis" shows the vast ambitiousness of the undertaking, the concentration of so many musicians in the studio playing live together and feeding into work that was so much grander than the breathtaking individual performances, while the sultry and intimate duet -- just piano and violin -- on "Forever Searching" reminds the listener and viewer of the purity of Tizer's jazz beginnings.

"It was all recorded live at Conway Studios," Tizer says. "So this is as authentic as it could possibly be. It's a star-studded cast, a lot of pros, and they all came in with their A-game. We got just the right mix of players in the band at this time to make this particular set of music come to life and be artistically deep in an accessible way. And that's always what my favorite music has been -- well written, well composed, but also with that room to stretch, that's the improvisation and the jazz of it."

Tizer praises each musician for his and her contribution to the whole. Conceptually focused while always generous as a composer, arranger and band-leader, Tizer produced Songs From The Swinghouse on his own and wrote all of the instrumental tracks himself, aside from one co-write, "A Prayer For Unity" with the band's other guitarist, Jeff Marshall. They wrote it just after the terrorist attacks in Paris in 2015, and the significance at this particular time amid current events is imperative for Tizer. "It's a message that the world needs on a much more macro level, and music is one of those few mediums that can bridge some gaps."

It's also a nice counterpoint to the groups Gospel, funkified arrangement of U2's, "Pride (In The Name Of Love)," the civil rights-inspired song that Tizer had loved since first hearing it in the movie In The Name Of The Father. "Ramble On" was, says Tizer, "the one tune I wanted to do because I'm not sure that there's any classic rock group more iconic than Led Zeppelin, and I wanted a song that we could take and put our stamp on, which I felt really strongly that we could with that tune, take it to another place." As for "Sad Lisa," dedicated on the album to the late daughter of a friend, "I had Cat Stevens' album Tea For The Tillerman since I was in high school, and right away I knew I could do something with that."

The evolution of the Lao Tizer Band is revealed joyously in Songs From The Swinghouse. Now incorporating a vocalist into the recording and touring band, the road ahead is enthralling to the group's founder. "I spent my whole life writing instrumental music, and now I'm working on original material for the group including vocals." Ultimately, Lao Tizer eschews being formulaic. "I try and just stay true to my muse and to use every bit of my facility to create great music that hopefully has its own voice and continues to evolve as I continue to evolve as a person. It's very reflective of me, it's all I've done all my life."