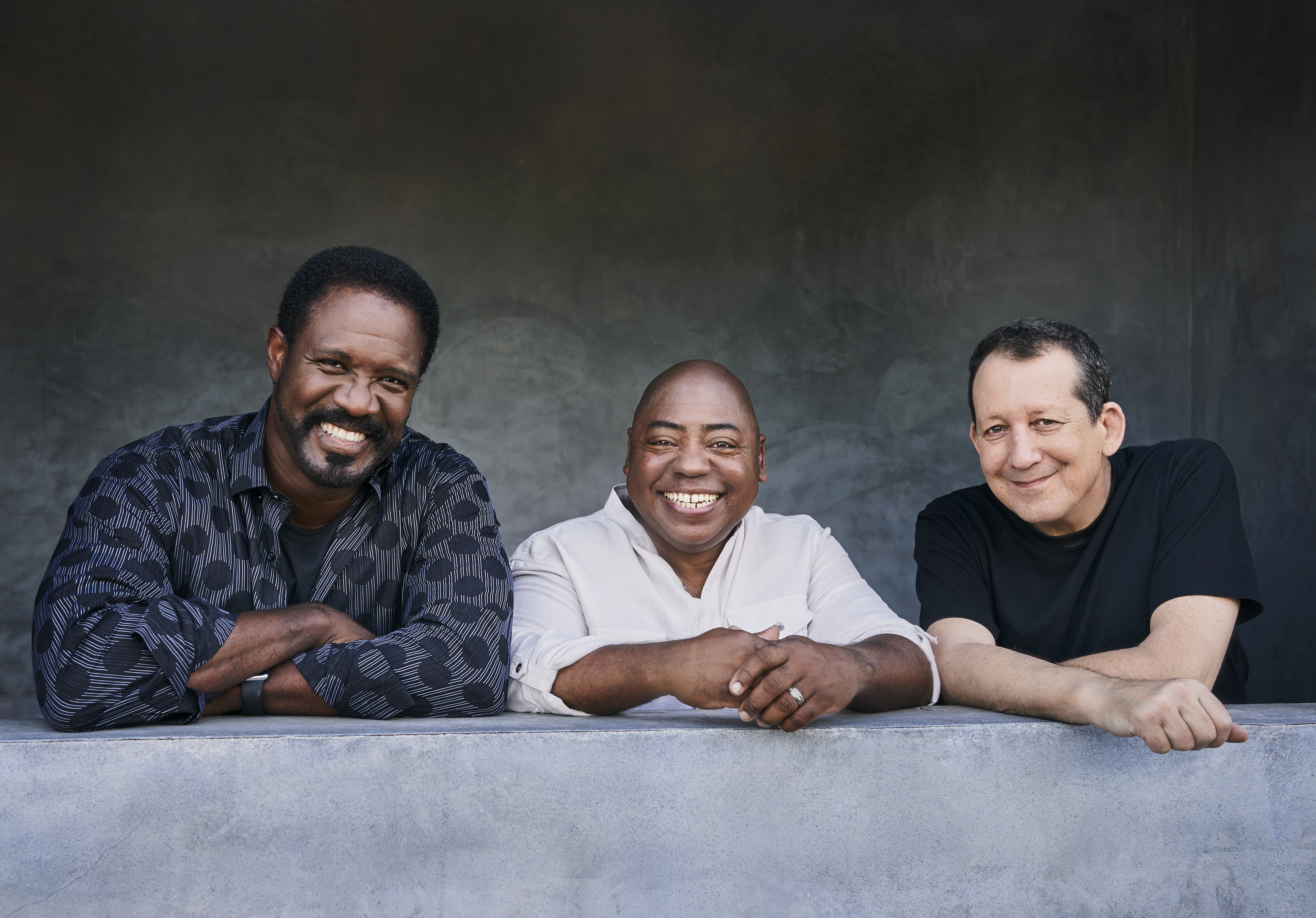 "Chuck Loeb - we could not have continued this journey that you have helped us begin without the spirit that you left with us. Your memory, musicality, and Zen-like quality was imparted on both Jeff and I so much that all we need to ask is 'What would Chuck do?' We miss you dear friend. By continuing we will always honor your memory." - Everette Harp

"Getting to know Chuck and working with him in JFS (Jazz Funk Soul) was really a blessing. I miss him very much but I'm so glad I had the chance to get to know him both personally and musically. He was a very sweet guy who was very funny and a pleasure to work with. He was incredibly musical and had superior chops, both as a songwriter, producer and as a jazz guitarist. We had a great relationship as co-writers and he would always inspire me to come up with my best ideas because his musicality was at such a high level." - Jeff Lorber

"Chuck, you're one of the best musicians and best people I've ever met. I speak in present tense because you are not gone, you just are not here. I miss you and look forward to making music with you in heaven. "- Paul Jackson Jr.

There are certain musicians for whom music is a calling and necessity. The evidence is heard in their inspired creations and witnessed in the gravitational force of their performances. Contemporary Jazz pioneers, Grammy winning pianist/keyboardist Jeff Lorber, Grammy nominated saxophonist Everette Harp and the late guitarist and multiple Grammy nominated Chuck Loeb, are three artists who exemplify this notion. JazzTimes Magazine describes the threesome as "..A hefty, and very tasty helping of jazz, funk and soul...with the ability to blend their styles seamlessly” while AllMusic touts "...Creatively vibrant unit with a shared vision." In 2014, after logging many miles on the road with one another, Lorber, Harp and Loeb formed Jazz Funk Soul with the mission of recreating on record the spontaneity and explosive chemistry of their live shows. Revered as three of the primary architects of Contemporary Jazz, the threesome’s credits collectively include millions of records sold, a Grammy win and multiple nominations and performance credits with some of the biggest names in music including U2, Bob Dylan, Aretha Franklin, Miles Davis, Stan Getz, The Isley Brothers, Billy Joel and Chaka Khan. Jazz Funk Soul’s eponymously titled debut came in 2014 and was followed by More Serious Business in 2016. The world mourned the loss of guitarist, producer and composer Chuck Loeb, affectionately dubbed as “The Clark Kent of Jazz Guitar,” on July 31, 2017. Loved not only for his superb musicianship by musicians and fans alike worldwide, Loeb was equally adored for his gentle and beautiful spirit. Life And Times, to be released on Shanachie Entertainment on January 25, 2019, celebrates the eternal inspiration and legacy that Chuck Loeb left behind and unites Lorber and Harp with guitarist Paul Jackson Jr. Jackson’s credits include work with everyone from Quincy Jones and Patti LaBelle to Michael Jackson and Daft Punk.

Life And Times is an impassioned and celebratory set that swings from the opening note to the album’s final chorus. Each a dazzling virtuoso, accomplished bandleader, composer, arranger and producer in his own right, Jeff Lorber, Everette Harp and Paul Jackson, Jr. unite in the name of Jazz Funk and Soul to offer ten memorable originals that defy category. Their irresistible recipe is simple - gorgeous melodies, unforgettable grooves, exhilarating solos and charged interplay. Life And Times assures us that the journey continues and reaffirms the precious gift of all of our Life And Times. Jazz Funk Soul’s newest adventure opens with Jeff Lorber’s jet- fueled and jubilant “Exotic.” “Blacksmith,” which Lorber penned with Everette Harp, is a soul-drenched composition that is graced by the addition of a robust and rock-steady horn section arranged with fellow saxophonist David Mann. The duo also co-wrote the breezy and delightful “Room W Vu.” Everette Harp composed the beautiful impassioned and upbeat excursion “Walkin’ With You” while the album’s first single, Lorber’s “Windfall,” is a blues-infused swinger and gospel tinged romp that elevates us higher. The album’s title track is a sweet ditty perfect for the soundtrack of our Life And Times at any given moment.

Paul Jackson Jr.’s “Fifth Ward” is a lush R&B ballad while his shared compositional credits on “Sunset Rock” offer a smooth sailing escapade that shows off Lorber’s agile chops. Jackson and Lorber also co- wrote the ultra funky “Where You’re At” and the soul-struttin “Cadiwampus.”

Pianist, composer and producer Jeff Lorber has been a major innovator on the creative music scene for over three decades. Along with maestros Herbie Hancock, Joe Sample and Bob James, Lorber is a groundbreaking Fender Rhodes pioneer. Having produced for everyone from Dave Koz to Kenny G, the Grammy nominated pianist’s long running acclaimed ensemble, Jeff Lorber Fusion, was a major force in Contemporary Jazz’s early beginnings. The Berklee College of Music alum’s 2014 CD Prototype with his Jeff Lorber Fusion scored a Grammy for ‘Best Contemporary Instrumental’ album.

Everette Harp’s soulful and trademark blend of Jazz, R&B, Funk and Pop have made him a favorite among fans, fellow musicians and critics alike. Harp’s impressive career that has allowed him to collaborate with everyone from Aretha Franklin, Chaka Khan, Anita Baker, Luther Vandross and Patti Labelle to George Duke, Herbie Hancock, Billy Joel and Kenny Loggins. Harp has left an indelible imprint on the scene with his own unique, muscular and soulful approach. His work on TV has brought his saxophone into the homes of millions who have heard him playing the theme songs for such popular TV shows as Entertainment Tonight and Soul Train. He also holds the distinction of being a former member of the posse on the first Arsenio Hall Show. A graduate of North Texas State University, Harp also hosted the radio program Smooth Jazz Odyssey with Everette Harp for a stint on WLOQ in Orlando, FL. His most recent solo release is First Love.

Los Angeles native Paul Jackson, Jr. launched his own solo career in the late 80s. His distinctive musical style and technical prowess have made him a favorite among live audiences. First call for numerous musicians, Jackson has recorded with an impressive roster of musicians including Quincy Jones, Barbra Streisand, Whitney Houston, Patti LaBelle, Michael Jackson and Bob James, among many others. He has also lent his guitar work to several film scores including “Get On Up,” “Zootopia” and “The Color Purple.” The guitarist is also featured on Daft Punk’s CD Random Access Memories, which scored five Grammys in 2014. Paul Jackson Jr.’s latest solo CD is Stories From Stompin Willie and pays tribute to his dear friend and music icon George Duke.