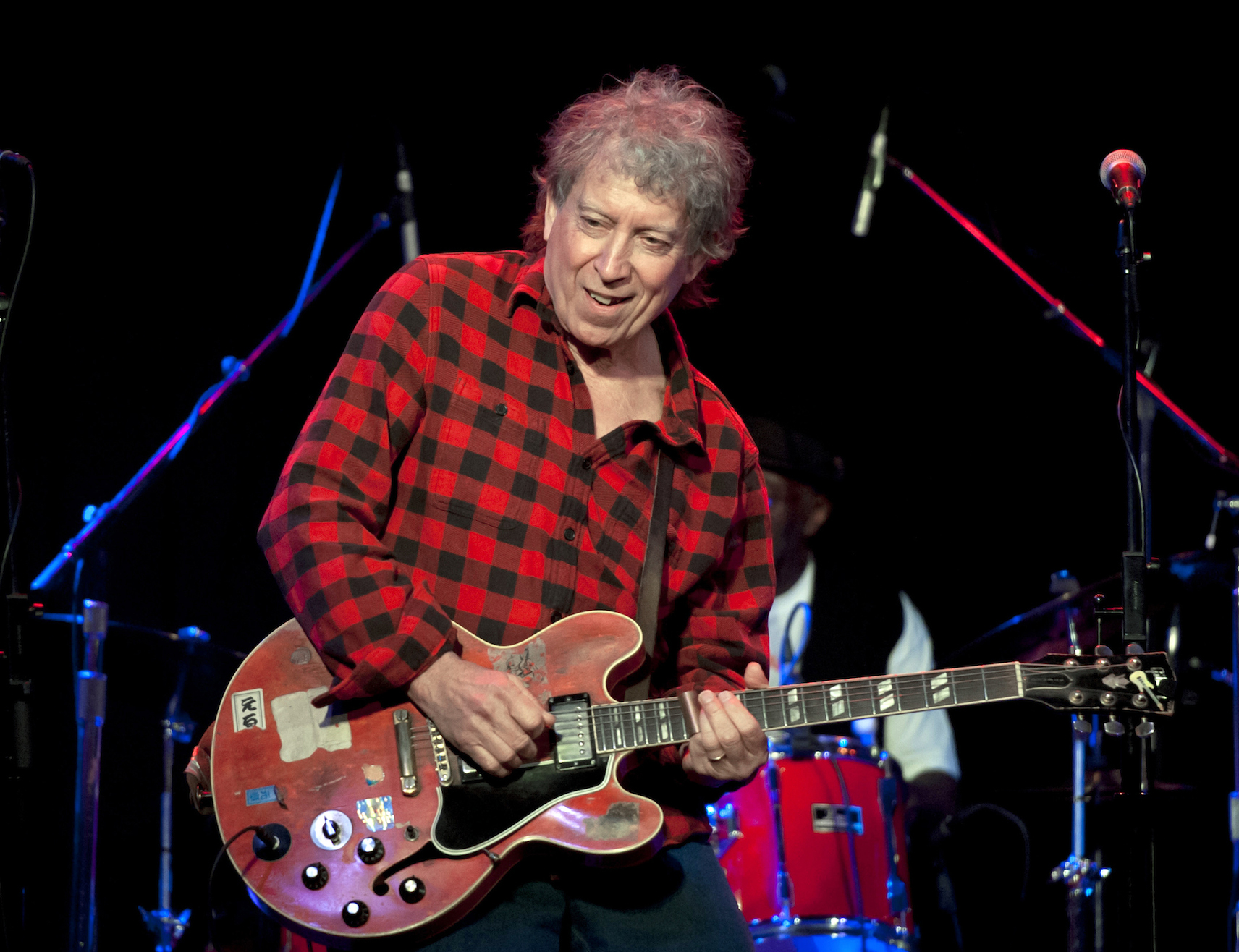 On the title track of his new album, Can’t Even Do Wrong Right, legendary blues guitarist, songwriter and singer ELVIN BISHOP spins a tale of a not-too-smart criminal getting caught by his own foolish missteps. The shaggy dog story, fueled by Bishop’s down-home delivery and deep blues slide guitar, is an affirmation of the Chicago Sun-Times’ ebullient praise: “It’s impossible not to like Bishop. He’s always singing something lowbrow and uplifting.” With his buoyant and deceptively loose-sounding ensemble behind him, he’s also playing some of the most spirited and distinctive blues slide guitar today.

Can’t Even Do Wrong Right, with hilariously spot-on cover art by musician/artist Paul Thorn, finds Bishop firing on all cylinders and having fun while doing it. Fueled by his stellar road band, Bishop has created another highlight in a career chock full of them. Five of the songs are Bishop originals, including Let Your Woman Have Her Way, on which Bishop’s friend Mickey Thomas sings the lead (this is the first time Thomas, the ex-Jefferson Starship singer, has recorded with Bishop since he provided vocals on Bishop’s classic hit Fooled Around And Fell In Love). An outstanding instrumental version of Jimmy Reed’s Honest I Do harkens back to Elvin’s childhood: this was the very first blues song he heard coming from Nashville’s WLAC, the late night R&B 50,000 watt powerhouse radio station, beaming all the way to his Oklahoma home. In the 1950s in Oklahoma, everything was racially separated except the radio (“They couldn’t segregate the airwaves,” Bishop recalls). With the addition of his Grammy Award-winning pal Charlie Musselwhite on Old School and No More Doggin’, Can’t Even Do Wrong Right hits its target at every turn. The album is sure to find a place in the hearts and ears of his many longtime fans, and will open the door to scores of those just joining Elvin’s never- ending party.

Although Bishop has been performing his rollicking brand of electrified front porch blues for over 50 years (his first professional gig was as guitarist for Junior Wells’ band in 1962), he is as vital and creative an artist today as he was when he first hit the national scene in 1965 with The Paul Butterfield Blues Band. He is still as slyly good-humored and instantly crowd-pleasing as he was when he was effortlessly creating solo hits during the 1970s. His reemergence on Alligator Records in the late 1980s and into the 1990s, along with his more recent releases on Blind Pig and Delta Groove, insure his place on the short list of bona fide blues guitar heroes. Elvin's music mixes thick blues grooves with timeless rock flavors spiced with a touch of country, a dab of Moms Mabley’s and Pigmeat Markham’s ribald black comedy, and the laid back feel of his Northern California home. His guitar playing seems to improve with every performance, and his songwriting is filled with clever revelations and homespun wisdom. Living Blues says Elvin's guitar playing is "as full of fresh licks and unbounded energy as the day he and Mike Bloomfield set the blues/rock world on its ear."

Born in Glendale, CA on October 21, 1942, Elvin grew up on a farm in Iowa before relocating to Oklahoma when he was ten. He first got hooked on the blues listening to late night R&B radio as a teenager, and began collecting, listening to and absorbing blues music. Once Bishop realized that many of his favorite records were recorded in Chicago, he used his 1959 National Merit Scholarship as a way to get closer to his blues heroes by enrolling in the University of Chicago—its campus surrounded on three sides by the South Side black community. “The first thing I did when I got there,” Elvin recalls, “was make friends with the guys working in the cafeteria. Within fifteen minutes I was into the blues scene.” Leaving his physics studies behind, Bishop turned to blues music full time. He befriended bluesman Little Smokey Smothers and would hang out with him for hours on end. Smothers liked young Bishop and took the willing student under his wing, teaching Elvin how to really play—and live—the blues. In short order, Elvin became an accomplished and innovative player. Many years later, in 2000, Elvin and Smothers recorded their only album together, the appropriately titled That’s My Partner!, for Alligator.

After Elvin crossed paths with harmonica player and fellow University of Chicago student Paul Butterfield, the two began sitting in together at black blues clubs, often jamming with Buddy Guy and Otis Rush. They first formed The Paul Butterfield Blues Band in 1963, adding Jerome Arnold on bass, Sam Lay on drums and Mark Naftalin on keyboards. Prior to cutting their debut LP in 1965, Michael Bloomfield joined the group as second lead guitarist, and created a groundbreaking, all-star band. The self-titled The Paul Butterfield Blues Band introduced electric Chicago blues to the rock audience for the first time. With the release of East/West in 1966, the band's popularity hit an all-time high. Their straight Chicago blues sounds drifted further into progressive and experimental rock ‘n’ roll and—with two world-class lead guitarists on board—the band helped pave the way for groups featuring multiple virtuoso guitarists, like The Allman Brothers and Derek and the Dominos. The Rolling Stone Record Guide says that Bishop, along with Bloomfield, recorded “brilliant guitar passages that did as much as anything to establish the mystique and heroism of modern rock guitarists.”

Towards the end of the 1960s, after recording three albums with The Paul Butterfield Blues Band, Elvin decided to move on, heading for the San Francisco area. “I liked it there. I didn’t have to look over my shoulder,” Bishop recalls. He became a regular at the famed Fillmore Auditorium jam sessions, playing alongside Jimi Hendrix, Eric Clapton, B.B. King and many others before embarking on a solo career.

He recorded first for Fillmore Records, then Epic and then for Capricorn, where his career took off. He charted with Travelin’ Shoes before scoring big in 1975 with Fooled Around And Fell In Love (the song reached number three on the pop charts).

After a seven-year recording hiatus, Elvin returned to his blues roots in 1988, signing with Alligator and releasing Big Fun to critical and popular acclaim. He followed in 1991 with Don’t Let The Bossman Get You Down! and in 1995 with Ace In The Hole, delivering no-holds-barred sets of rootsy blues fueled by Elvin's wicked guitar playing and tongue-in-cheek originals. With 1998’s The Skin I’m In, serious guitar playing and humorous looks at aging made the album a true blues statement for the end of the 20th century. Entertainment Weekly described the album as “sheer, unpretentious joy.”

As Bishop continues to tour and release new music, his stature just continues to grow. Through the years his music has appeared in film and television, including the 1997 use of She Puts Me In The Mood (from Big Fun) in Quentin Tarantino’s Jackie Brown. In 2005 he performed on the internationally televised Grammy Awards broadcast alongside Keith Urban, Tim McGraw, Gretchen Wilson, Lynyrd Skynyrd and Allman Brothers’ guitarist Dickey Betts. He recently appeared in the documentary Born In Chicago. In 2012 and 2013 he was nominated for inclusion into the Rock And Roll Hall Of Fame as a member of The Paul Butterfield Blues Band.

Now, with Can’t Even Do Wrong Right, Bishop again is ready to share his happy-go-lucky vibe with his fans around the world. His guitar/vocal/songwriting triple-threat talent, along with his ability to deliver a rollicking good time wherever he goes, assures his not-to-be-missed live performances are consistently packed to the gills with cheering fans. The Chicago Tribune says Bishop plays “good-time music guaranteed to put a smile on your face...serious playing, potent slide guitar and razor-sharp licks.” Musically, it’s as if Elvin Bishop can do no wrong, and that is perfectly all right.