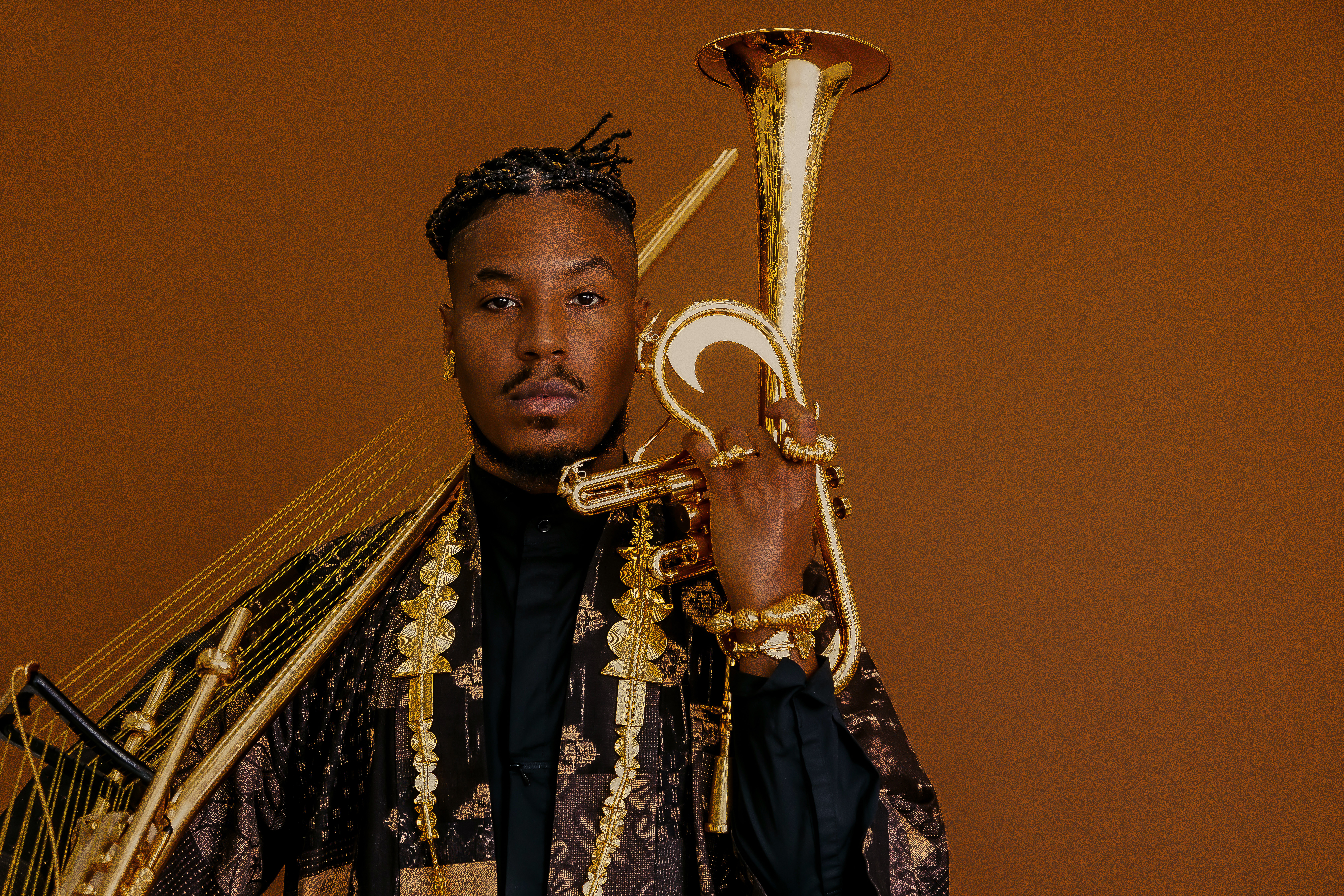 Chief Christian Scott aTunde Adjuah (born March 31, 1983, in New Orleans, Louisiana) is a two-time Edison Award winning and five-time Grammy Award nominated sonic architect, multi-instrumentalist, composer, producer, designer of innovative technologies and musical instruments, Stretch Music record label and app company founder, and crowned Chieftain of the Xodokan Nation of the Black Tribes of New Orleans. He is the grandson of legendary Big Chief, Donald Harrison Sr., and the nephew of jazz innovator and legendary sax man, Big Chief Donald Harrison, Jr. His musical tutelage began under the direction of his uncle at the age of thirteen. After graduating from the New Orleans Center for Creative Arts (NOCCA) in 2001, Adjuah received a full tuition scholarship to Berklee College of Music where he earned a degree in Professional Music and Film Scoring thirty months later.

Since 2002, Adjuah has released thirteen critically acclaimed studio recordings, three live albums and one greatest hits collection. According to NPR, Adjuah “ushers in new era of jazz". He has been heralded by JazzTimes Magazine as "Jazz's young style God" & “The architect of a commercially viable fusion.” Adjuah is known for developing the harmonic convention known as the “forecasting cell” and for his use of an un-voiced tone in his playing, emphasizing breath over vibration at the mouthpiece. The technique is known as his “whisper technique.” Adjuah is also the progenitor of “Stretch Music,” a jazz rooted, genre blind musical form that attempts to “stretch” jazz’s rhythmic, melodic and harmonic conventions to encompass multiple musical forms, languages and cultures.

The 2015 release of the recording Stretch Music marked the partnership between  Adjuah’s Stretch Music record label and Ropeadope Records. Critics and fans alike have praised the recording. Stretch Music is also the first recording to have an accompanying app, for which Adjuah won the prestigious JazzFM Innovator of the year Award in 2016. The Stretch Music App is an interactive music player that allows musicians the ability to completely control their practicing, listening and learning experience by customizing the player to fit their specific needs and goals.

In 2017, Adjuah released three albums, collectively titled The Centennial Trilogy, that debuted at number one on iTunes. The albums’ launch commemorated the 100th anniversary of the first Jazz recordings of 1917. The series is, at its core, a sobering re-evaluation of the social political realities of the world through sound. It speaks to a litany of issues that continue to plague the collective human experience, such as slavery in America via the Prison Industrial Complex, food insecurity, xenophobia, immigration, climate change, racial and sexual orientation and gender inequality, fascism and the return of the demagogue.

Th chief was announced as the Jazz Journalist Association’s Trumpeter of the Year, and he was recipient of the Herb Alpert Award in the Arts.

Ruler Rebel’s 2017 release coincided with the first annual Stretch Music Festival at Harlem Stage in New York. The Stretch Music Festival, created and curated by Adjuah, explores the boundaries of Stretch, Jazz, Trap, and Alternative Rock with some of music’s most poised and fiery rising stars. The festival will resume its annual schedule in rotating global locations in 2022, in the post-pandemic live music world.

in 2019 Adjuah released Ancestral Recall, which features poet laureate Saul Williams. Ancestral Recall aims to sharpen and expand upon its Stretch Music predecessors with a new focus on decolonizing sound.  Both Emancipation Procrastination and Ancestral Recall were nominated for Grammy Awards in the Best Contemporary Instrumental Album category.

Adjuah’s 2020 release, Axiom, is a live album recorded at New York’s Blue Note Jazz Club at the start of the pandemic lockdowns in the U.S. Around the globe, fans and critics alike herald Adjuah’s live performance prowess. Notable highlights include a sold-out Carnegie Hall concert and NPR’s Jazz Night in America global broadcast. With Axiom, music fans hear Adjuah and his stellar band live, once again. Adjuah is nominated for Grammy Awards in the Best Contemporary Instrumental Album category and for Best Improvised Jazz Solo for his performance on Axiom’s “Guinevere. Although all releases since Adjuah’s departure from Concord Records/Universal Music Group have earned top ten positions on Billboard Magazine jazz charts, the non-jazz classification of the last three Grammy album nominations substantiates Adjuah’s vision for Stretch Music as truly genre blind.

Adjuah scored his identical twin brother’s and Director’s Guild of America Award recipient, writer-director and Spike Lee protégé, Kiel Adrian Scott’s, Student Academy Award nominated film, Samaria. Other recent film credits include the inclusion of Adjuah in the upcoming Bill and Ted Face the Music, starring Keanu Reeves and Alex Winter, where he plays a member of The Future Council and contributes music for Louis Armstrong’s character. Adjuah is also featured in the upcoming romantic comedy, The Photograph, starring Issa Rae and LaKeith Stanfield released in 2020. The chief also starred in Billboard and 1800 Tequila’s Refined Players Series and is the subject of the

Additionally, through his partnership with Adam’s Instruments, Adjuah designed a signature line of horns, the Siren, Sirenette and Adjuah Trumpet/Reverse Flugelhorn, that are revolutionizing brass instrument design all over the world. His most recent musical instrument innovation is the new Adjuah Bow, a customized kamele n’goni/kora stylized gravichord hybrid, which he will debut on his next recordings.

Adjuah is a scion of New Orleans’ first family of art and culture, the Harrisons, and the grandson of legendary Big Chief, Donald Harrison Sr., who led four nations of the City’s Black Tribes. The HBO series, Treme, borrowed the storyline and the name “Guardians of the Flame” from the group. Adjuah began as a member of his grandfather’s nation in 1989. In 2018, Tulane University’s acclaimed Amistad Research Center announced its archive of the Donald Harrison, Sr. legacy papers to highlight the Harrison/Scott/Nelson family’s contributions to the arts, activism, and African diaspora cultural expressions. The Harrison family’s story has been documented by Oscar winning director, the late Jonathan Demme, in his post-Hurricane Katrina filmic works.

Adjuah is dedicated to a number of causes that positively impact communities. He gives his time and talents in service to several organizations which garnered him a place in Ebony Magazine’s 30 Young Leaders Under 30. He has supported or supports, through his time and talent, Each One Save One, NO/AIDS Task Force, Girls First, The Mardi Gras Indian Hall of Fame, Good Work Network, Black Lives Matter and numerous other community service organizations. Holding master classes, creating and participating in discussion panels, creating content, and purchasing instruments for youth music programs and individual youth musicians are all part of Adjuah’s community-based work. He has worked with Guardians Institute in New Orleans’ 9th Ward, which is dedicated to reading and fiscal literacy, cultural retention and a firm commitment to the participation of community elders and artists in uplifting and supporting youths in underserved areas of New Orleans. Adjuah currently sits on the Boards of Guardians Institute and The NOCCA Institute. Since Adjuah’s emergence on the jazz music scene, he has been a passionate and vocal proponent of human rights and an unflinching critic of injustices throughout the world.