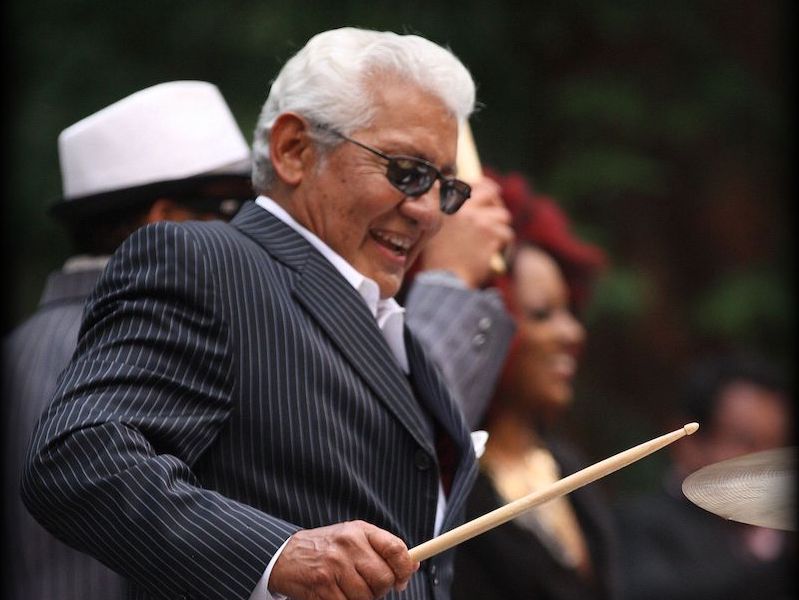 Pete Escovedo toured internationally with the legendary guitarist, Carlos Santana, for five years and performed on three Santana albums:  Moonflower, Oneness, and Inner Secrets. Mr. Escovedo left Santana to follow in the musical footsteps of his mentor, the late Great Tito Puente who influenced his music and decision to form his own orchestra consisting of a five-person horn section with strong rhythm and percussion personnel.

On his website, http://peteescovedo.com/ you will find links to hear his music, see video performances and read his biography. More information about his autobiography “My Life in the Key of E " is also on his website.

Mr. Escovedo finished working on his last CD released in April 2018 a labor of love musically titled " Back to the Bay " which received a Grammy Nomination in November 2018. Rhythm of the NIght released September 21,2021 could be his last recording project stay tuned .

In 2013 Pete Escovedo was honored with a Jazz Tribute Award at the Los Angeles Jazz Society 30th Anniversary. In 2009 Mr. Escovedo had the honor of performing at the White House for President Obama and was requested to return for a repeat performance. A proud native of Pittsburg California he remains the humble person he is.

July 13, 2023, Mr. Escovedo will celebrate 67 years in the entertainment business and his 86th birthday.

November 18,2021 Pete received a lifetime Achievement Award from the Latin Grammy’s in Las Vegas Nevada at the MGM Grand Hotel in the Grand Garden Arena.