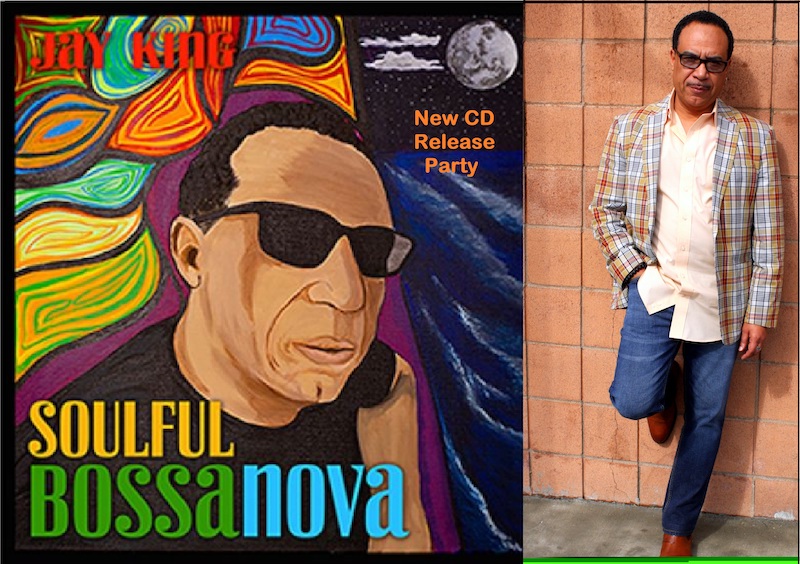 Jay King is embarking on his 3rd solo album titled SOULFUL BOSSA NOVA and the third one is a charm, not that his first 2 albums (Open Book & Helens Son) are chopped liver, but this one is something special.

From the opening number (Soulful Bossa Nova) till the ending track (Breathe - Cami's Song) you recognize you're listening to a masterfully crafted album. Mostly Produced by Derek DOA Allen (even where Big Mike Hart & Buddy Bangs and Ivan Johnson make production appearances) DOA (as he prefers to be called) has his fingerprints all over the place.

What is most inspiring about this album is its originality, creativity and plain bravery to just make music without any special features or effects that are tricks that can only be produced and reproduced in a recording studio.

The musicianship is stellar!!! Cal Bennett, Kings long time collaborator (Saxophones & Flute) doesn't disappoint and his DNA is all over this project, Nils (Smooth Jazz Guitarist) makes a few wonderful special appearances that adds another level of nuances, while Big Mike Hart & Buddy Bang create a wonderful tapestry of world sounds with sweet guitar rifts only a virtuoso could provide on the "My Song" track. Ivan Johnson proves why he is one of the most sought after up and coming producers in the business with his lush arrangements (Soulful Bossa Nova & Once Had Your Lovin) and exquisite piano playing and to top things off he's a music director for multiple artist including Jay King, Joe Leavy, Club Nouveau, Karyn White and Kem.

But the BIG Dawg and Star of this production show is Derek DOA Allen and Jay King. You can tell there is a chemistry and respect level between the two to the umpteenth degree as King states "I trust DOA, his ear, his production instincts and his direction and leadership. When we are in the studio together I have no problem taking direction from Derek DOA Allen, he is a master producer who has done all of the homework necessary to make something wonderful happen when we're in the studio together, in my opinion he is the Quincy Jones of this era and time will prove my statement to be true..

Allen & King have created a beautiful tapestry of sounds and songs and that is best exemplified in the compositions they wrote and worked on together (All Your Love, Baby Lets Dance Tonight, Feels So Nice and Opened Up My Heart) I mean there's truly not a bad song on this album.

King is no slouch either as his track record has proven over the years. There are only a handful of record professionals who can boast successes they've had on both the major label and independent label level and King is in that elite group.

Even with that being said, this might be Kings greatest fete thus far. He and Allen literally make magic. I truly mean this is musical magic based on music standards, it's fresh yet a throw back to era's past, it's daring yet simple and it's sophistication and sexy while being elegant and breathtaking all at the same time.

Leon Guidry who is a respected on air personality at 97.5fm KDEE in Sacramento, CA had this to say about one of the songs: "Another breath of fresh air. This song sounds like it has already stood the test of time. Poetically structured for personal & social long term relevance ... Breathe, is an instant classic musically & poetically. I feel the spirit of Marvin, Mayfield and Holland-Dozer-Holland when I listen. LEON GUIDRY

If you haven't already heard the Soulful Bossa Nova Album and you're hungry for a real musical experience and journey you might want to check out Jay Kings Soulful Bossa Nova project and get ready for your ears to dance, sway and ask you to take a drive on coast or lay out on a sexy beach because it is a musical trip of ecstasy you are about to embark on......

Your Bay Area's Who's Who Entertainment Network