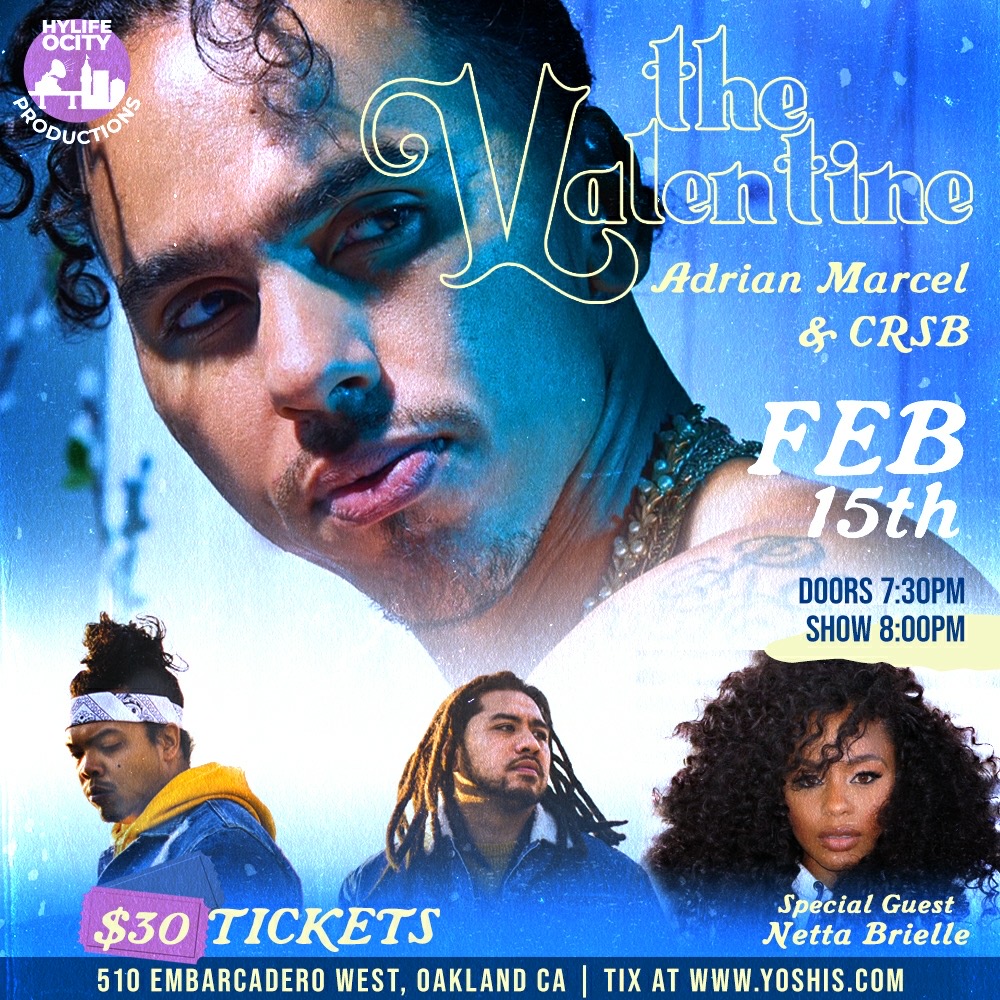 ADRIAN MARCEL "THE VALENTINE" W/ CRSB & THE BAY'S NETTA B

East Oakland’s own Adrian Marcel is solidifying himself as an R&B chameleon whose smooth and sultry sonics pair seamlessly with his boldness and emotional bravery. With an across-the-board artistic upbringing and versatile Bay Area cultivation, Marcel’s organically resonant work provides palatability and relatability, allowing fans to feel seen and heard regardless of where they’re from or who they are. His work largely pertains to the importance and power of passionate love, a topical testament to his generation-spanning influences such as Al Green, Donny Hathaway, Ginuwine and Maxwell. A graduate of the prestigious Oakland School for the Arts, Marcel’s attraction to music was apparent.

Under the tutelage and direction of his mentor, Grammy-winning R&B singer Raphael Saadiq, Marcel developed a following thanks to a steady string of projects in the mid-2010s, which featured musical assists from major acts like Destiny’s Child alumna Kelly Rowland and rappers Wale and Too $hort. His debut mixtape, 2013’s 7 Days Of WEAK, was released under Universal Republic Records, and featured production by the J.U.S.T.I.C.E. League, Beatroc and more. The seven-song effort introduced fans to the open, emotionally-driven lyricist Marcel continues to be. Shortly after, he notched his first platinum-selling single, “2 AM,” a trap-influenced rhythmic banger with accompaniment by rapper Sage The Gemini, and found himself on Billboard’s Rhythmic Songs chart for 10 weeks in 2015, thanks to his rap-sung single “Take Your Time.”

His first album, 2017’s #GMFU – Got Me F%^&ed Up, finds him tapping in with Saadiq, as well as with singer-songwriter James Fauntelroy and producer No I.D. The LP marries his traditional influences with bedroom-ready contemporary flair, amplifying the importance of both R&B classes in his catalogue. He took his creativity and career into his own hands with his sophomore album, 2019’s 98th. The first project released under his own independent label Third Voice Music Group finds him sitting comfortably in the pocket of modern R&B, while never losing a beat of what makes him stand out thematically. In addition to music, Adrian has also taken up acting and starred in the TV One bio pic, "The Bobby Debarge Story."

“I think that music right now is very much about trends,” Adrian continues. “There's new artists [who] have created these lanes that I think [upcoming] artists behind them are trying to emulate. I think a lot of my sound is based on my experiences. The sonics of it is Oakland. There’re so many elements of just ratchetness—and I'm comfortable in that, I'm not trying to run from it. I think that my music is just relatable for people who feel like the ordinary person.”

CRSB: CRSB is a musical duo based out of the San Francisco Bay Area who has created their own brand of "Island Soul Infused Pop" Consisting of Members Chris Ramos and Sonny B. CRSB combines honest and memorable songwriting with a heart right out of the islands.