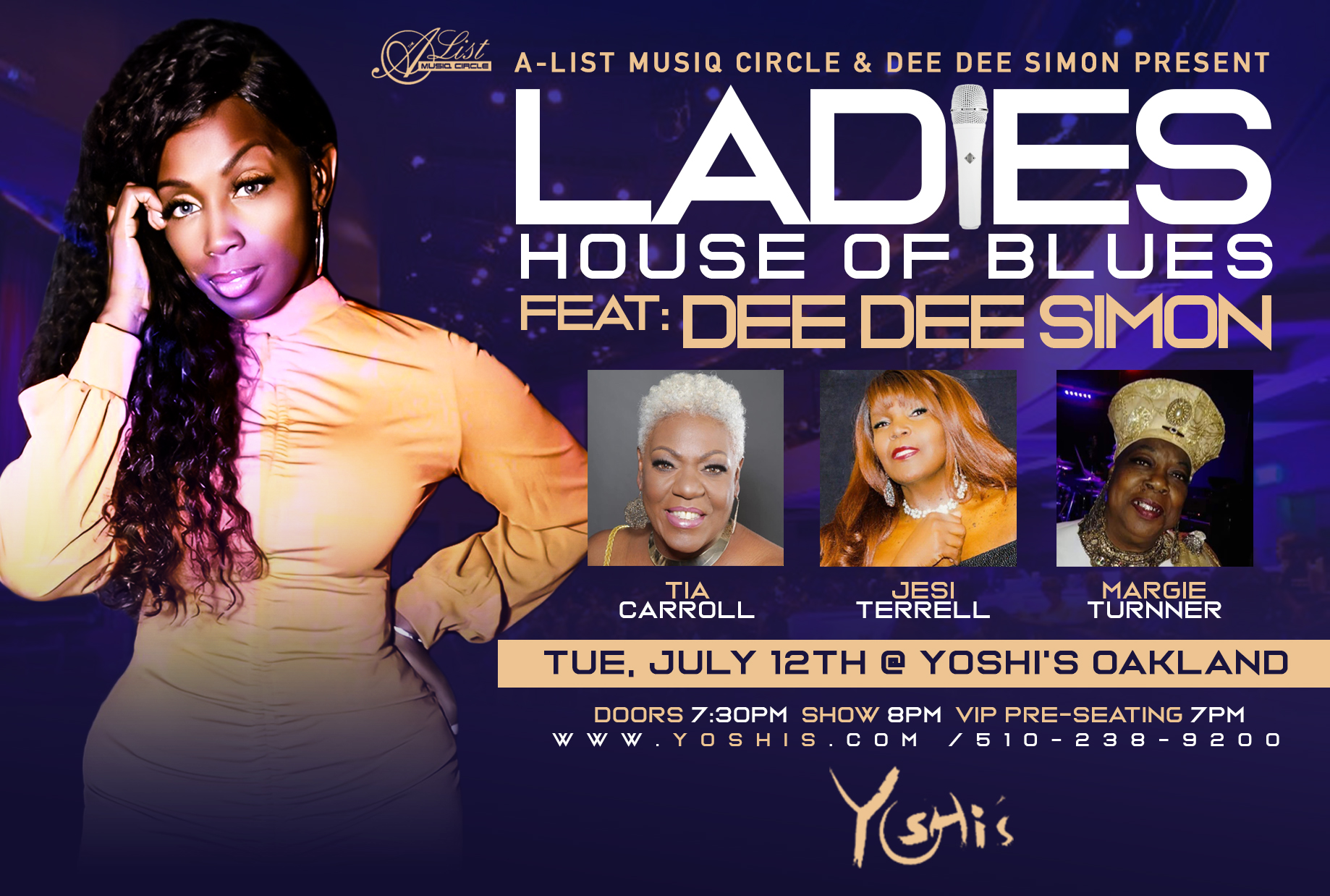 This All-star line-up of Blues Divas are sure to rock the house with intimate tales of Love, Life & Pain while delivering a feeling of blues you are sure to enjoy.

Dee Dee Simon will also be performing songs from her new 2022 CD release now available on all digital platforms and sold on night of show.

Presented by Dee De Simon Presents & Mark Elliot of the A-List Musiq Circle- Your Bay Area's Who's Wo Entertainment Network.

Dee Dee Simon Soul Blues Sanger, Dee Dee Simon has been moving people with her soulful voice since the age of 14 yrs old in church and on the stage. She signed with Interscope Records in 1998 and had a Billboard Hit, "As Long As I Live",

Influenced at an early age by the music of Aretha Franklin, Chaka Khan, Tina Turner, and Gladys Knight, Simon brought her own gritty style. She is loved for her passion. She is a decorated Entertainer with 48 Music Awards. She's known for her Sold Out Whitney Houston Tributes. With 3 Albums and 10 Released Singles, she fearlessly unveils her life, Her Truth! She has toured across the states sharing the stage with Gladys Knight, Jeffrey Osbourne, Ron Isley, Maze, and more. She is known as well for her travelling Gospel stage plays. Every performance, she leaves her heart on the stage. Her voice raises the hairs on the arms and gives chills. You will not forget The Soulful Blues voice of Dee Dee Simon The Truth. https://www.deedeesimon.com/

Tia Carroll Award winning California native Tia Carroll has quietly accumulated one of the most impressive entertainment resumes in the Bay Area and has become one of the most sought-after female singers on the West Coast. Tia has headlined venues and festivals all over the world with her band as well as some very well-established host bands. She has shared stages with legends Ray Charles, Jimmy McCracklin, Syl Johnson, Sugar Pie DE Santo and B.B King, Tommy Castro, Elvin Bishop, Igor Prado and Eric Gales. She has earned a reputation for her up-beat and engaging manner on stage and audiences around the world are treated to an unforgettable show. http://www.tiacarroll.net/

Margie Turner is a "Blues Singer" hailed out of a place called "Eldorado Arkansas"  she now lives in the Bay Area of Oakland ca where she's been singing n performing some "50" plus years through out the bay area n beyond.  She has also performed in many Blues Festivals through out her career, such as "The Dusk to Dawn" Blues festival in Tulsa Oklahoma, n the infamous King Biscuit Blues festival in W Helena Arkansas. Oh did I mention she also worked as a back up singer for Mr. Johnnie Taylor for 3 years. Margie loves performing for her folks  far n near, here n there, occasionally throwing in a joke or two to make them laugh n keep em happy. You will enjoy this "Blues Diva" as so many has before. https://www.facebook.com/margie.turner.104

Jesi Terrell is a sultry-voiced singer with a rock’em-sock’em stage presence. She is a seasoned cross-genre performer originally from Chicago, who has shared the stage with such Blues legends as B.B. King, Koko Taylor, and Little Milton. Jesi can break into a ferocious, full-bodied wail, invoking the combination of lust and aggression that’s so basic to the blues?? Terrell has always had a knack for conveying the sensuality of the blues. Put your dancing shoes on, since we know, you will want to do more than tap your feet to Jesi’s music.  https://jesiterrell.wixsite.com/jesiterrell/biography