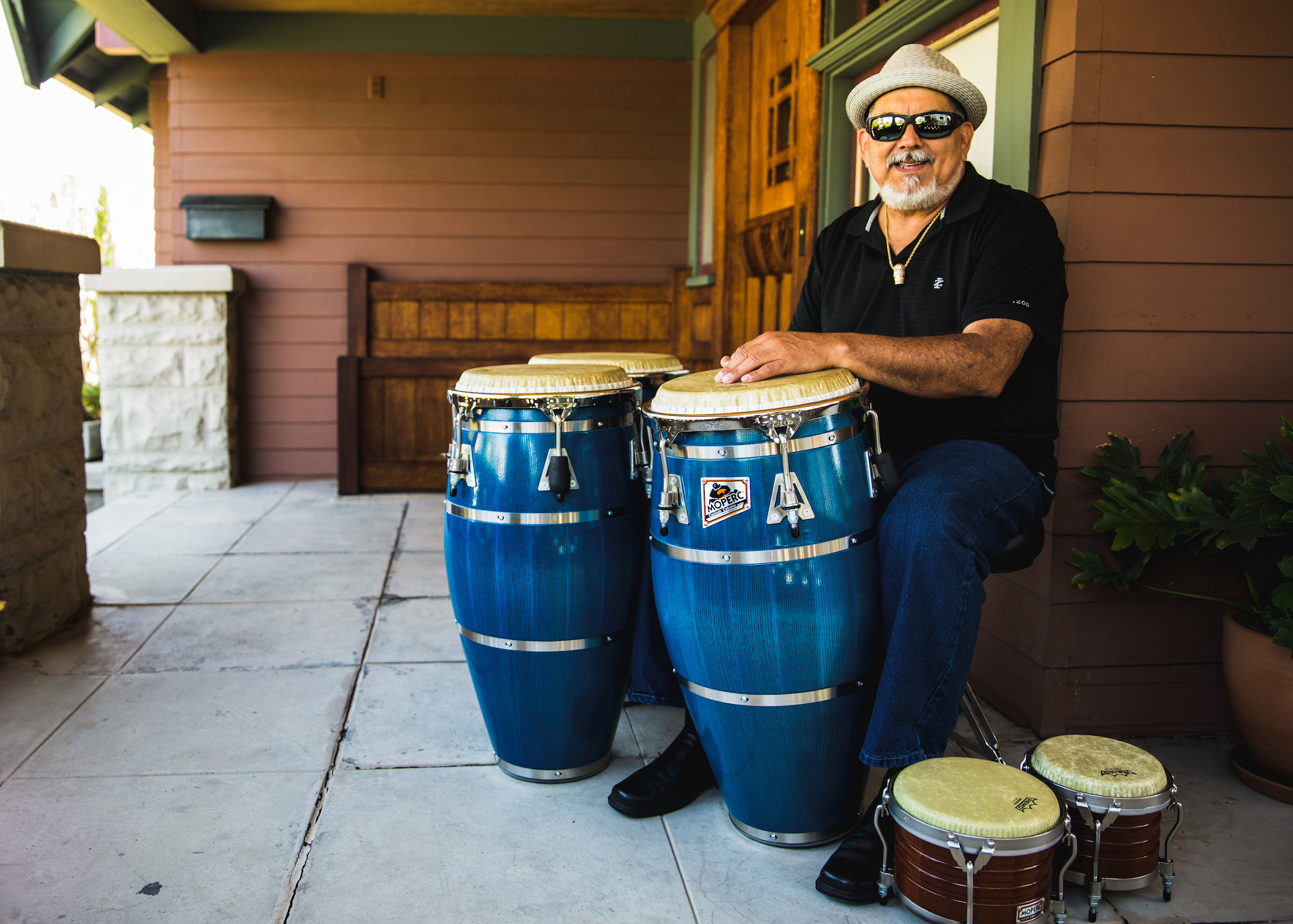 A kaleidoscope of Latin percussion

For more than three decades, conguero Poncho Sanchez has stirred up a fiery stew of straightahead jazz, gritty soul music, and infectious melodies and rhythms from a variety of Latin American and South American sources. Throughout his career Sanchez has held aloft the torch lit by such innovators as Mongo Santamaria, Tito Puente and Cal Tjader, embraced by each of those icons and entrusted to carry forward the traditions of Latin Jazz.

Sanchez’s influences are numerous, and his catalogue is rich with his homages to several of his mentors – Santamaria, Puente and Tjader among them. But alongside those Latin pioneers, among the more prominent figures that inform his music is the iconic saxophonist John Coltrane. On his latest album Trane’s Delight, Sanchez pays tribute to the late jazz legend with Latin-tinged reimaginings of Coltrane classics as well as new pieces composed in honor of the tenor titan.

The album provides a direct link from the 67-year old conguero to his 11-year old self, who spent his own money on an album for the first time when he bought the 1962 classic Coltrane. Ultimately, Trane’s Delight offers a tribute not only to the stellar music and influence of the great John Coltrane, but a spotlight for the myriad ways that the tenor giant’s explorations have fueled courageous artists like Poncho Sanchez. The results, as on this passionate new album, would no doubt delight Trane’s searching spirit.

Although born in Laredo, Texas, in 1951 to a large Mexican-American family, Sanchez grew up in a suburb of Los Angeles, where he was raised on an unusual cross section of sounds that included straightahead jazz, Latin jazz and American soul. By his teen years, his musical consciousness had been solidified by the likes of John Coltrane, Miles Davis, Cal Tjader, Mongo Santamaria, Wilson Pickett and James Brown. Along the way, he taught himself to play guitar, flute, drums and timbales, but eventually settled on the congas.

At 24, after working his way around the local club scene for several years, he landed a permanent spot in Cal Tjader's band in 1975. "I learned a great deal from Cal," says Sanchez, "but it wasn't as though he sat me down and taught me lessons like a schoolteacher. Mostly it was just a matter of being around such a great guy. It was the way he conducted himself, the way he talked to people, the way he presented himself onstage. He was very elegant, very dignified, and when he played, he played beautifully. The touch that he had on the vibes – nobody has that sound. To me, he was – and is, and always will be – the world's greatest vibe player."

Sanchez first formed his own group in 1980, leading his ensemble during Tjader's vacation periods and recording two albums for Discovery. The conguero remained with Tjader until the bandleader's death in 1982. That same year, he signed with Concord for the release of Sonando, an album that marked the beginning of a musical partnership that has spanned nearly four decades and yielded more than two dozen recordings. Trane’s Delight is the latest installment in that ongoing partnership.

After more than two decades in music, Sanchez's efforts paid off when his album Latin Soul received a Grammy award as Best Latin Album of 1999. Throughout the next decade, Sanchez continued to record, releasing such albums as 2000's Soul of the Conga, 2001's Latin Spirits, 2003's Out of Sight!, 2005's Do It!, 2007's Raise Your Hand, and 2009's hard bop-influenced Psychedelic Blues. In 2011, he paid tribute to the innovative Afro-Cuban recordings of Dizzy Gillespie and Chano Pozo by teaming up with trumpeter Terence Blanchard for Chano y Dizzy! Sanchez followed that up with a vibrant concert set with his Latin Jazz Band entitled Live in Hollywood.

With Trane’s Delight, Poncho Sanchez continues to honor the giants whose music has helped shape his own, while building upon the rich legacy they’ve left behind. As this celebratory and heartfelt album exemplifies, he’s long since joined the ranks of the luminaries to whom he pays such profound tribute. Sanchez’s deeply personal reimagining of the jazz canon, as well as his own spirited original compositions, affirm his place at the forefront of Latin Jazz’s trailblazers.