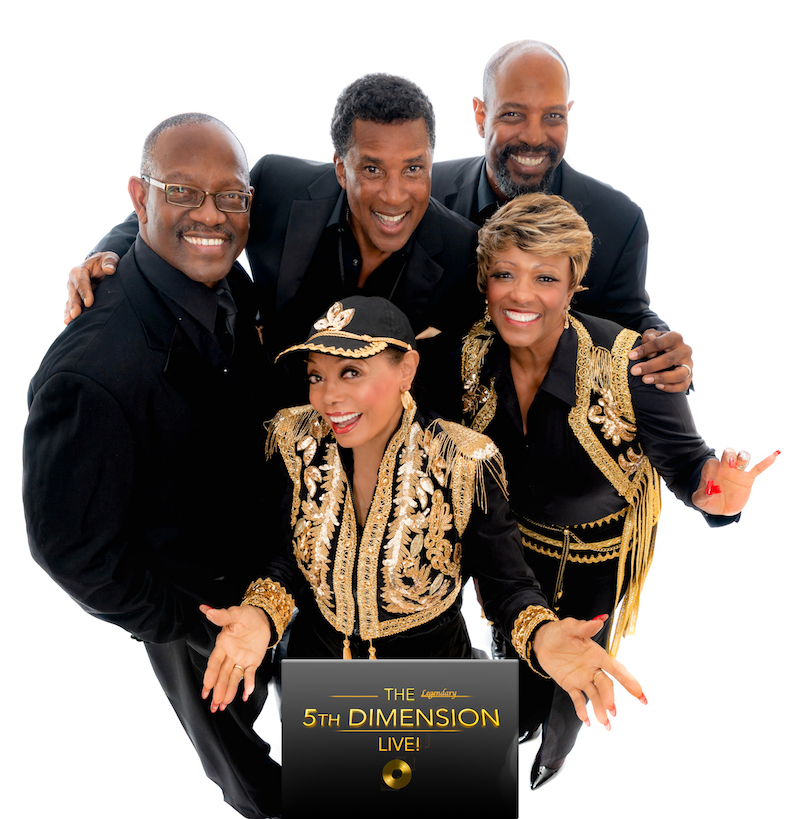 One of the most prolific soul, R&B groups in musical history

In 1967, a little-known vocal group called the 5th Dimension recorded the song “Up, Up and Away” which catapulted the group to instant stardom. Countless magazine covers, world tours and several Grammys later, the 5th Dimension is recognized as one of the most prolific soul, R&B groups in musical history.

The 5th Dimension has made over 25 million in sales with 22 Top 40 hits and five No.1 songs, including “Up, Up and Away,” “Wedding Bell Blues,” “One Less Bell to Answer,” “Last Night I Didn’t Get to Sleep At All,” and the iconic “Aquarius/ Let the Sunshine In”. They have performed on the world’s most famous stages, including Radio City Music Hall alongside Frank Sinatra and the Hollywood Bowl, and delivered unforgettable television performances on the Ed Sullivan Show, Soul Train and The Tonight Show with Johnny Carson. The 5th Dimension has secured its position in the Grammy Hall of Fame, with 14 gold records, six platinum records and six Grammy Awards.

In 2015, The 5th Dimension celebrated 50 years of extraordinary entertainment. Original member Florence LaRue and company continue to deliver dynamic performances that stand the test of time and captivate audiences from Las Vegas to Manila, Philippines.

While remaining true to their original, five-part harmonic sound, The 5th Dimension remains versatile, attracting audiences of all ages and nationalities. Within the last decade, The 5th Dimension has taken the stage with several prestigious symphony orchestras, entertained at the White House and performed for families at Disneyland in California and Disney World in Florida, demonstrating the groups diverse appeal. The iconic group continues to sell out venues across the United States, Europe and Asia.

According to a recent review by White Plains Citizens, ”[The 5th Dimensions’] voices and harmony are stronger, more emotional and as meaningful, perhaps more meaningful than when they first became hits in the 1965-1975 era. Today’s Dimensions deliver a tight, personal show, as crisp as old top 40 Radio.”